Author · Illustrator Isobelle Carmody
Menu
Back to all books

You are born with the yearning arrow.

The Legendsong Saga encompasses the novels Darkfall and Darksong which centre on the adventures of Glynn and Ember Flanders in a parallel universe. Glynn and Ember Flanders, fraternal twin sisters, are holidaying in Greece when Glynn is seemingly swept out to sea and drowned. However Glynn finds herself transported to the world of Keltor and rescued from the sea by an Acanthan windwalker, Solen. Feigning amnesia, she gradually deciphers this new world where some aren’t held by gravity and others see prophetic visions. 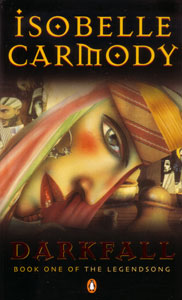 After the death of her parents and her beloved instructor Wind, Glynn devotes herself to the care of her sick twin sister, feeling her own life to be unimportant. One night, during a midnight swim, she is swept across the Void to the troubled watery world of Keltor, through a portal created to summon the mythical Unraveller. What is the mysterious connection between Glynn’s world and Keltor? And why does the man who rescued her from the waves bear an eerie resemblance to Wind?

Where to buy Darkfall 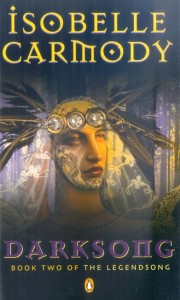 These are the signs by which the Unraveller shall be known:

Half-blind yet seeing all,
marked by visioning yet without Darkfall mark,
who lives yet sings the death song,
who is born yet is not of the Song of Making,
who is gifted from the Great Waters,
who is crowned in bright flame
. . . Legendsong of the Unykorn.

After crossing to the troubled world of Keltor, Ember learns that her twin sister also crossed, and is in great danger. She must find Glynn and warn her before it is too late.

Where to buy Darksong

Back to all books